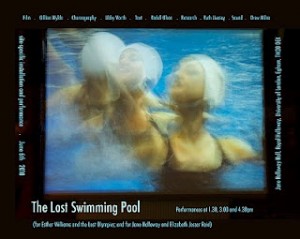 The Lost Swimming Pool (London, June 2010) was a site-specific Installation and performance (for Esther Williams and the Lost Olympics; and for Jane Holloway and Elizabeth Jesser Reid). In part an homage to Esther Williams who would have represented the US as a swimmer in the 1940 Summer Games had they not been cancelled, and an examination of women’s physical education at the moments of the founding of Bedford and Royal Holloway Colleges.

Project conceived and directed by Redell Olsen in collaboration with Libby Worth, Gillian Wylde, Ruth Livesey, and Drew Milne.

Watch a single screen of the installation here