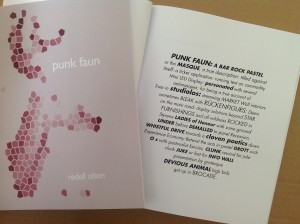 This work was commissioned by Isabella d’Este for the walls of her studiolo after she attended a daylong screening of Matthew Barney’s Cremaster at The Roxy in Brixton, London, and a few weeks later stumbled upon an artist’s talk by Raphael on Ed Ruscha’s painting “They Called Her Styrene.” However, it was her experiences that same evening in a karaoke bar off Oxford Street that convinced her to go through with her planned idea and to approach a writer who could carry out her design for a bar rock pastel. At the time of the commission the patron was herself concerned with the plight of deer on the roads of Europe and North America and was an ardent campaigner for the introduction of sonic deer deterrents based on installations pioneered by Max Neuhaus. In a drawing, now unfortunately lost, and in this written description (for the first time available here within the text of a popular edition) she details her request for a masque of grotesque pastoral and mythic proportions, a cloven poetics that would feature commerical activity to be streamed live on the walls of her studiolo. She similarly required the inclusion of players as ordinary citizens—or often as ordinary citizens as artists—”got up in devious animal brocade,” to perform whatever forms of cultural consumption, display and collection they encountered over the duration of their everyday experience, all this for her personal entertainment and meditative consolation. D’Este paid for the work upfront safe in the knowledge that she had purchased a piece of poetic invention in which even the title was against itself.

Redell Olsen’s previous publications include: Book of the Fur (Rempress, 2000), Secure Portable Space (Reality Street, 2004) and the collaboratively edited bookwork Here Are My Instructions (Gefn Press, 2004). From 2006-2010 she was the editor of How2 the online journal for modernist and contemporary poetry, poetics and criticism by women. Her recent projects have involved texts for performance, film and site-specific collaboration and include: Newe Booke of Copies (2009), Bucolic Picnic (or Toile de Jouy Camouflage) (2009) and The Lost Swimming Pool (2010). She is reader in poetic practice at Royal Holloway, University of London where she is the director of the MA in Poetic Practice.